A Netsuke, pronounced neh tsu keh (proper) or net ski (common, but improper), is an intricately and exquisitely carved miniature sculpture drilled with connecting holes so that it can be threaded on a cord and serve as a toggle. Ranging in size from 1 to 2 inches (2.5 to 5 centimeters), the first Netsuke can be traced back to 16th century Japan.

Until the late nineteenth century and early twentieth century, Japanese men wore traditional Japanese garments - the kosode and kimono. These garments have no pockets. So those who wore them needed a place to keep personal belongings; usually effects such as pipes and tobacco, money, seals, or medicines. The solution was a series of containers, cords, beads, and toggles. 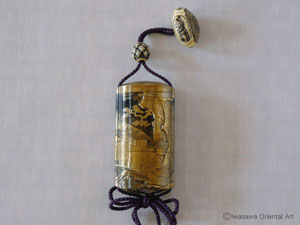 The entire ensemble, called sagemono, was then worn at the waist, hung by cords from the obi, or the kimono's sash, and functioned as a sort of removable hip pocket: The original fanny pack, but much more artistic. The sagemono most often took the form of exquisitely crafted boxes, or inro, which were held shut by sliding beads on cords, known as ojime. Threaded onto the cord was the Netsuke: A carved, button-like toggle that secured the cord at the top of the sash. 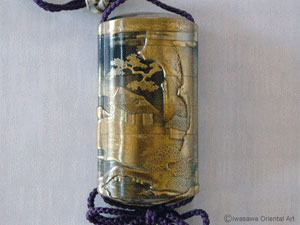 The ubiquity of sagemono, and Netsuke in particular, in daily living, ensured that the quality of Netsuke ranged from common place to beautiful art. Netsuke were made using a variety of materials mainly wood and ivory; but other materials such as shell, bone, horn, metal and precious stones were also used. Wealthier people would have finer netsuke, and it was possible to tell the status of an individual by the quality of their Netsuke. 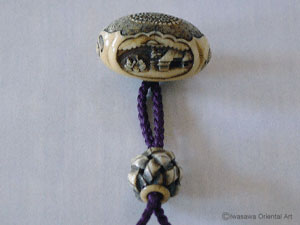 In 1853, Commodore Perry arrived in Japan to establish a coaling base for the United States and open trade with the country that had been in self-imposed isolation for more than 200 years. Netsuke started leaving Japan with outgoing trade ships.

Ironically, as the world began discovering these beautiful art forms, traditional Japanese sartorial fashion gave way to European garments. Japanese men adopting suits, with its pockets, made the need for sagemono and Netsuke unnecessary. This coincided with Western Europe?s then fixation of collecting oriental artifacts. Thus, as collecting Netsuke was becoming extremely popular in Europe towards the end of the 19th century and the beginning of the 20th century; large supplies of Netsuke became available and were sold as novelty items. Netsuke became collectibles everywhere, except in Japan.

Netsuke's popularity today is due to its art form rather than its function. Although it is possible that Netsuke may yet again become functionally popular as toggles for mobile phones or perhaps personal digital assistants, today the Netsuke remains the passion for art collectors around the world.